Now that I’m a parent, I still rely on my Mother for so many things. Phone calls. Encouragement. Prayer. Child care.  Does your mother mean the world to you? Share your #MomStory below for a World of Coca-Cola Tickets for your family of four and learn more about one of Atlanta’s biggest attractions.

We’ve been blessed that my Mother has visited from New York quite often to celebrate A.J.’s birthday and when we visited Disney World last year.

Each time she visits, we try to fit in a number of Atlanta attractions: the Georgia Aquarium, Sweet Auburn District, Historic Ebenezer Baptist Church. But we haven’t been to the World of Coca-Cola yet and I plan to put it on our must-see list for her next visit. 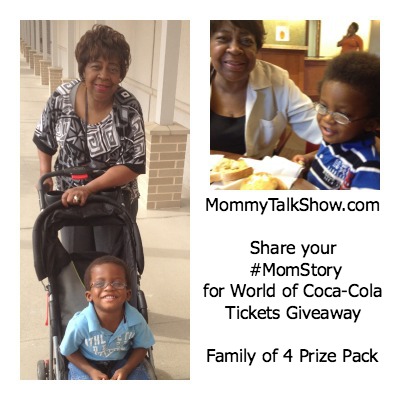 4 Facts about the World 0f Cola-Cola

Visit the World of Coca-Cola website to learn more about the tour and purchase tickets. It’s located in downtown right in the center of Atlanta attractions like the Georgia Aquarium and the CNN Center.