Joyce Brewer June 12, 2015 Atlanta Area Comments Off on Win World of Coca-Cola Tickets at All About Atlanta Facebook Chat 366 Views

This summer I’m looking forward to visiting the World of Coca-Cola with my husband and son. Who doesn’t want cool off inside the amazing space and enjoy Coca-Cola drinks from all over the world? A.J. loves to read the maps, explore the artwork and memorabilia, and watch the the new 4D movie experience. When I saw the movie last year, it moved me to tears! Keep reading for details on how you can win World of Coca-Cola tickets for your family to enjoy! 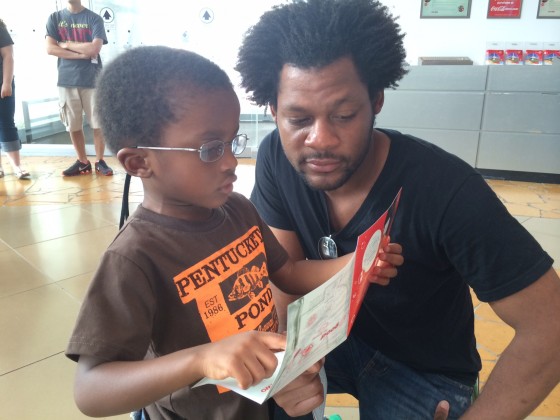 This summer I’m focusing on local content for “All About Atlanta” every Tuesday night on the Mommy Talk Show Facebook page.  Tuesday, June 16th from 8-8:45p join me for a Mommy Talk Show Facebook chat to celebrate the 25th anniversary of World of Coca-Cola. You’re eligible to win World of Coca-Cola tickets (four) for your family and friends to enjoy! In honor of its anniversary, WOCC sent me tickets to give away and an annual membership to enjoy with my family.

RULES: You must RSVP and participate in the chat to be eligible to win. This chat is not sponsored by or associated with Facebook in any way. 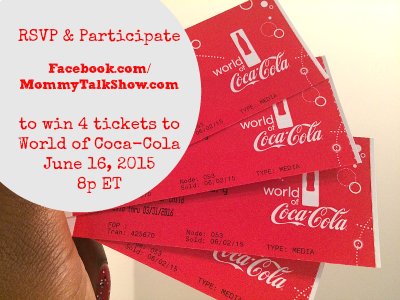 “This year also marks the 100th anniversary of the iconic Coca‑Cola contour bottle. In recognition of this milestone, Coca‑Cola Design invited creative minds from around the world to recreate iconic Coca‑Cola artwork from the last 100 years. Now the attraction is sharing the anniversary love and featuring artwork chosen from those submissions in a new exhibit in the Pop Culture gallery, Kiss the Past Hello. This special exhibit will be open through May 2016.”

Enjoy these fun facts about World of Coca-Cola and be sure to join me for the June 16th Facebook chat!

Contact Mommy Talk Show to feature your local business on “All About Atlanta” on an upcoming Tuesday night.