[VIDEO] Do you tell your children the truth about Santa Claus? #ShopTheAvenue

This is the first year our almost 4 year old son, A.J. has started talking about Santa Claus. When he did, it reminded me of the agreement my husband and I made before he was born – no Santa, no Tooth Fairy, no Easter Bunny. Not that we don’t think he’ll see these things. But we will tell him the truth. It seemed rather hypocritical as parents to tell him “Be honest” when we were serving him a load of bull. So I took A.J. to an Atlanta event with the Jolly Old Elf and even let him take a picture. Watch the video and then tell me, “Do you tell your children the truth about Santa Claus?” 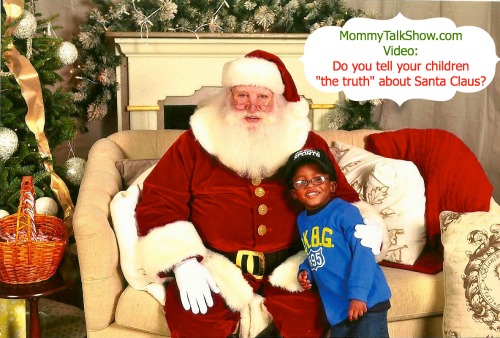 Warning: Don’t watch this video around your children if you’d  like them to believe in Santa. On the other hand, if you have a child who recently learned “the truth” about Santa, you may want to watch it with them and get their thoughts.

Let me stop you before you start thinking “if she doesn’t want him to believe in Santa Claus, why did she take him to a breakfast with Santa event?” My answer: because it’s fun and make believe. I also took him to the Doc McStuffins Doc Mobile Clinic in Atlanta a few months ago. She’s not a real person either. To me, it’s the same. A kid activity, not a “meet the real Santa experience.” After the video, I’ll share my Tooth Fairy experience with you that might shed some more light.

Visit Shop The Avenue at West Cobb in Marietta this holiday season for a free photo with Santa.

Wednesdays, December 11 & 18 from 3 PM – 7 PM. Santa will be inside Barnes & Noble, and complimentary carriage rides will begin at Stride Rite. Don’t forget your camera to capture the perfect family photo.

Tag your favorite photos taken at The Avenue on Facebook, Instagram, Pinterest or Twitter with #shoptheavenue before the end of the month. You may be randomly selected to receive a gift card to #shoptheavenue.

The Tooth Fairy story is one of the worst from my childhood because I felt like I’d been bamboozled. I figured out on my own that The Tooth Fairy did not exist. I noticed that anytime I told my Mother that I’d lost a tooth and was putting it under my pillow, I’d find a half dollar there the next day. But one day I decided not to tell her, put the tooth under the pillow and tested my theory. The next morning there was no money. From then on my faith in all of the holiday characters crumbled. I don’t want to be responsible for A.J. feeling that way. I will tell him the truth because I expect honesty from him.

Disclosure: We were invited to attend a breakfast with Santa event at Shop The Avenue West Cobb. All thoughts and opinions are my own. You’re welcome to respectfully disagree with me in the comments or the Mommy Talk Show YouTube channel.